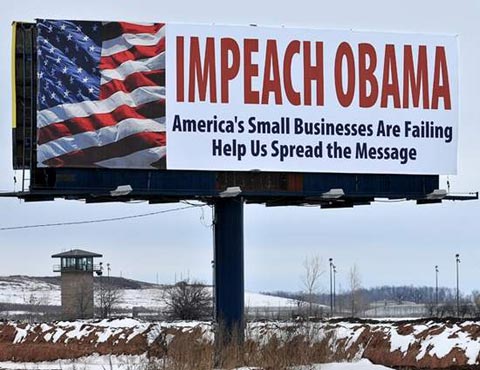 Another Day, Another Billboard — this one in Oshkosh, Wisconsin, home of the Fightin’ Overalls. But soon as it went up, the guys who signed the deal started backing away from the responsibility:

Two Menasha attorneys linked to an Oshkosh billboard calling for the impeachment of President Barack Obama sought Monday to deflect the flak generated by the controversial sign.

Attorney Thomas J. Wroblewski said he and his father, Thomas S. Wroblewski, merely are the registered agents for an unnamed company that rented the billboard and are not responsible for its message.

“It is nothing personal for my dad or me,” Wroblewski said. “It is a limited liability company that our firm represents. The company chose the location of the billboard and chose the language.”

Fine. We understand. And really, we’re just looking for an excuse to update the original billboard with something more telling.

The more apt version of the Cheney billboard would feature his classic saying – “Go Fuck Yourself”. Anybody want to chip in for a billboard? :)

I’d like to see what the people responsible for this think Obama should be impeached *for* exactly; very little of what the teabaggers claim is the “socialist agenda” has actually gotten done. Further, what are their thoughts on the whole “criticizing the President is helping the terrorists” meme from the Bush years?

the boarders are making me miss the birthers.
also
@al2o3cr:
their rules do not apply to them.
silly

@al2o3cr: Darling, you’re making the fatal error of expecting logical thought from these people. I know, assuming others are rational human beings can be a hard habit to break but we must try.

you know this pic shows why the tea baggers are not a long term problem.
in 10 years all those fat old white men will be dead.

bastards changed the pic on me.but I saved it suckas

America’s small businesses are failing thanks to the recession that was started by W.

I’m going to have to agree with Keef on this one: at the core, the vitriol that is coming out of the Teabaggers and their willingness to try to unseat the lawfully elected representatives in the United States government has to deal with the fact that their president is black. They went apeshit over Clinton but nowhere to the level that I’ve seen it today — Clinton was labeled an evil liberal but not a socialist. I hope that someone calls them on it or that there is a Macaca moment pretty soon that will expose them for who they are.

I have relatives on my father’s side — the Glenn Beck loving side — who are finding Facebook and trying to friend me. IGNORE IGNORE IGNORE. Last thanksgiving, I heard nothing but that same old bullshit and that bible verse from psalms and etc. Once my grandparents are gone I really want nothing to do with them and I’m tempted to change my last name to my mother’s maiden one. Mr. Cub comes with me to family functions and seems accepted but I’m sure we’re being called faggots when we’re outside of the room.

TJ/ I need a third snark site. This is my primary site, and since we were abandoned by Megan I’ve gone back to the W as a second, but the third string- Sadly No soured on me when one of the commenters called me a n***er (don’t ask). So I need a third site to comment on while I wait for meetings and for layouts to come in. Any suggestions?

@Tommmcatt Say Relax: You might try theawl.com, run by Gawker castoffs, but it’s a bit too self-consciously hip for my taste.

@rptrcub: I think the difference this time around is Fox and the internet. Clinton, for all the impeachment paralysis, didn’t have to deal with anything on this scale. Between them they’ve ramped up the crazy to the point where even the NYT has noticed.

@Tommmcatt Say Relax: Wait. They called you a nutter?

@Tommmcatt Say Relax: The mothership of Gawker now that Richard is back?

Why were you called a ni-thonk?

I like the snarkiness of Above the Law, but it’s focused on all things legal so it may not appeal as much to you. The comments on ATL are for shit, though.

I was arguing that one shouldn’t use ironic racism as a type of humor, and that the use of that word is never ok. I was begging for it, basically. But fuck them, I stand by my guns and haven’t been back.