Jonathan Edwards To Confess to Siring a Child With Space Alien 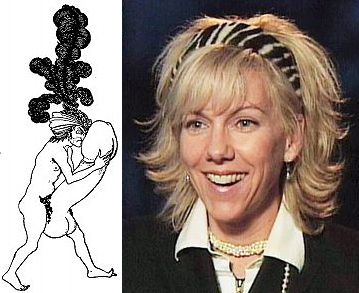 Failed presidential candidate Jonathan “Johnny Mill” Edwards is reportedly ready to confess to siring a child with space alien Rielle Hunter, a creature from outer space who invented a past as a failed actress and seduced Edwards onto her space ship for savage, inter-species pestorking during Edwards’ last campaign for which she posed a ‘documentary maker’.

Sources have told WRAL News that they expect former U.S. Sen. John Edwards to admit that he is the father of his former mistress’ 18-month-old daughter.

Meanwhile, reports are continuing to pile up that there is a sex tape of Edwards and the alien pestorking up a storm.

While he was unpacking [at a new home], [blabbermouth former Edwards campaign aide Andrew] Young discovered an odd videotape – one that involved Edwards taking positions that weren’t on his official platform.

The sex tape is of keen interest to the Department of Defense since most Americans, according to a scientific survey commissioned by Stinque.com spiritual director FlyingChainSaw,  clearly believe Edwards and the alien Rielle pestoked on her space ship, photography of which may yield incredible advances in martial-use technologies that would bankrupt America even faster.

Where Did John Edwards and Rielle Hunter Go to Fuck?

FlyingChainSaw
12:34 am • Sunday • August 16, 2009
comment »
Choose Your Delusion
More of This Please Nobody Can Eat Just One
14 Comments
JNOV

Choosing Wendy’s might have thrown off the votes a bit. Everyone knows you get busy in a Burger King bathroom.

OK. Been away and missed a few things but – this sex tape. Are they selling it at Amazon? Because I am there. And just wondering, does he wear his wrestling singlet for some/all of it? Oh, and also, Johnny. How could you do this to me?

You know I have an unpopular and scandalous toleration of the immorality of philandering, but this, this is something that is to me on an entirely different plane, this is real, genuine, shittiness and lack of character.

He denied his own child, refused to be father to his child, told the world this child was not his child.

Bad, bad bad. How is this child gonna feel when she googles Dad, goes to Wiki, and reads how he got one of his underlings to claim parenthood, probably with lots of money as motivator.

He needs to man up and own the consequences of his actions. He needs to start being a dad to this little girl. A good dad.

I am amazed by the similarity to the Rick Pitino thing, and Pitino’s perfect pick and roll, getting his most trusted underling to marry his alleged rape victim, and thus keep her quiet for 6 years.

@Benedick: BENEDICK!!! OMFG! I knew Johnny Mill post would make you return! xoxo to you and Mr. Benedick and the doggies!

@Benedick: He’s been a very bad boy. You need to punish him.

@Benedick: Hey there…. welcome back indeed. I had been away myself for a while.

@Promnight: I’m with you on that. There’s no kink factor to increase the diaper count, but the utter douche-bagginess of Johnny Mill gives it some diapers.

@SanFranLefty: There’s also the complicating factor that Johnny had long-since quit a losing campaign before the scandal broke. For me, those diapers will always include an asterisk.

This past Saturday, one of Bollywood’s most recognizable movie stars, Shah Rukh Khan, was detained because of his surname at Newark Liberty International Airport and questioned for over two hours before being released. The Wall Street Journal reports that Khan was in the U.S. to promote his new film about the racial profiling of Muslims.

I actually recognize him. From two movies — one set in NYC. The other’s about girls’ field hockey.

@Benedick: We need a note from home, otherwise it’s an unexcused absence.