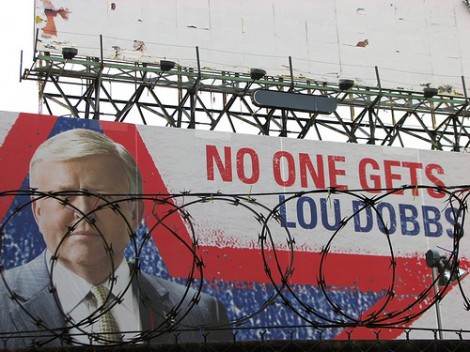 For the lunatic Dobbs, there isn’t one story that can’t be mapped back to illegal immigration, Dobbs’ uber leitmotif which he replays on most every broadcast. Illegals are running wild through the streets and our back gardens, spreading leprosy and breeding wantonly, threatening to outbreed white people and finally slaughter them to feed them to their teeming, ravenous progeny.

Dobbs, ever the enterprising news man, noticed that there was an election last year and that there was a new guy in the White House. Dobbs even noticed the new president, Barack Obama, was somewhat darker than he. Dobbs, without further contemplation concluded, of course, that Obama was a leprous illegal immigrant.

Dobbs immediately began running stories about the birther movement, the cackling mobs of skinheads, crystal meth addicts and neomedievalists which were howling for the impeachment and execution of President Obama, who they believe is a Kenyan sleeper agent planted in the US in 1961 to lay waste to the Republic. Dobbs was always careful to point out their beliefs were newsworthy in and of themselves.

This innovative approach to news gathering fascinated Stinque.com and, ever ready to emulate the trailblazers like Dobbs, organized its own Lou Dobbs’ natal survey, asking faithful readers and commentators, “Where Was Lou Dobbs Really Born?” The answers [see: chart, below] we received were provocative, most tellingly, however, was the assertion by most of our respondents – some 36 percent – that Lou Dobbs emerged in spontaneous parthenogenesis from the bowels of savage anti-semite and genocidist Julius Streicher, publisher of the Nazi propaganda newspaper, Der Stürmer. 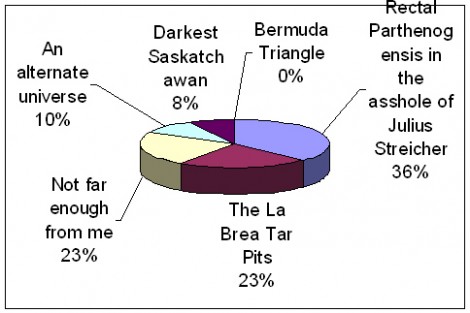 The timing of Lou Dobbs’ alleged birth and Streicher’s death are, indeed, telling. Streicher was hung in Nuremberg on October 16, 1946, mere months after Lou Dobbs’ professed birth date, an interval in which a parthogenically spawned offspring could quicken to viability outside ot its host. Dobbs’ claimed “birth” day is September 24, 1945. As yet, no one has come forward claiming to have witnessed Dobbs’ “birth.”

Dobbs is utter slime. You think a guy who launches daily Philippics about ‘ferners stealing our jobs would praise Obama for rescuing the U.S. auto industry, but of course, Dobbs is basically Pat Buchannan’s ideological fuck-bunny and so must, perforce, hate all darkies even more.

Loo is batshit unhinged. He should take his dog-whistling horseteeth and move to Loudobbsistantucky. The other weird thing about CNN’s crazy uncle is the ever-changing colour of his hair. He must be adding Javex to his Grecian because he goes from grey to piss-stained white every other week. Also, isn’t Loo’s gun-toting wife an immigrant?

Strange for a guy who likes to make his skin, um, oranger with that fake bronzer shit.

And I found a new video home, for now.

Afterbirther Lou Dobbs. I had to suffer through a podcast to get some of the material. Never again! Maybe.

The best note about this xenophobic, racist fuckwit?

He’s married to a Latina.

But she’s not one of them really; she’s okay.

@Signal to Noise: Really! Hmmmm…maybe he thinks it gives him street cred.

@Signal to Noise: Was she a mail order bride? My ex=husband got one from Peru for his 5th wife. One of his friends had one and she was so much more submissive and respectful than American women, so he decided to get one too. (In my defense, I married this asshole when I was 18, in a bad home situation, and didn’t know any better. Caught on and got out by 22.)

I think Loo is a lifetime member of the National Association of Hispanic Journalists.

I’ll guarantee that most Anglo professional haven’t been asked by co-workers whether anyone in their family cleans houses.

My mother’s been asking me that all my life.

@redmanlaw: I think Loo is a lifetime member of the National Association of Hispanic Journalists.

I think he’s actually a closeted, self-hating latino, born “Luis Adobe”. Now that he’s here, all the bluster is to keep his family out.

@redmanlaw: Sounds like something a wise Latina would write … oh, wait.

@redmanlaw: Excellent work. Glad she gets to keep doing it. Thoughtful, well-reasoned essays on controversial topics are all to rare in this world of information overload.

Unless you know something most of us don’t, I thought he was hanged.