Stinque
Home Latest Comments Log in
If it smells, we’re on it.
Stinque
This is America.
Fashionistas

Urban Outfitters for the Zionist Set 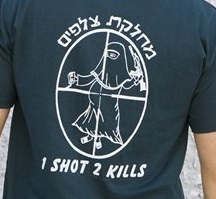 For some reason, probably because it’s too liberal, the Israeli Military has condemned t-shirts such as the one in this picture. The t-shirts are worn by troops who have finished basic training or other courses, and there others in addition to the one shown, which I think is in support of pro-choice legislation, or something. Other options include a shirt depicting a child in a rifle’s cross hairs, with text about how small targets are hard targets, or shirts showing Palestinian women crying and soldiers blowing up mosques.

Now that I’ve seen these shirts I’ve decided that the recent Israeli offensive in Gaza, and in fact everything that has happened or will ever happen in the Middle East, is not tragic at all. Instead, it is really, really, hilariously funny. Leave it to a cheap t-shirt to teach me an important lesson in the inherent humor value of religopolitical military conflict.

Reminds me of the Operation Ghetto Storm T-shirts that are so popular at police equipment shops.

At least they recognize that life begins at conception.

Is the woman holding a beer can in her right hand?

ADD: Pregnant Palestinians are covered head to toe and fighting with machine guns and beer? I should probably pay more attention to this conflict.

@Jamie Sommers: Probably an IED. Or a Tab.

@blogenfreude: Definitely not an IUD.

it’s just not bibi…saw a t-shirt and buttons saying “bomb iran”, which is the position of liberal friends. i can’t judge, have not walked this country long enough to comprehend the mindset…but i did watch “exodus” on mgm last weekend. ‘spains much.

@baked:
But more importantly, how are your walks in the country with the furbabies going? Have you picked up any hot (“yuffie”?) Israeli men yet? My personal opinion (since this is how I found Mr. SFL in the hills above Silicon Valley one spring day) is that a walk with an adorable dog or three is the best way for a girl to pick up a cute boy. Sweet nerdy cute boys who otherwise won’t talk to you will walk up and start petting your dog, so to speak.

@SanFranLefty: That’s a nice “how we met.” Too bad I don’t have a dog.

A friend of mine in DC just got the world’s most head-explodingly cute Black Lab puppy. If you want to be added to her ever-growing puppy-walking and puppy-sitting list, I will most definitely make the intros. A few hikes along the canal in Georgetown or Rock Creek Parkway or on the Mall, you’ll have tons of admirers.

As I finally admitted to Mr. SFL months after we were together, in the early weeks, I told friends I wasn’t sure if he was in to me or the puppeh. He told me “It was a package deal, honey.”

@SanFranLefty: There’s a “pet my pussy” joke in there somewhere but I’m too tired to find it.

@SanFranLefty: @mellbell: Oh yes mellbell go for the black lab puppy – they are indescribably scrumptious. They have these big paws on their little bodies and are just so adorable. There is one (Leroy) living a few doors down and I just melt whenever I see him.