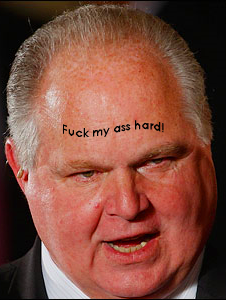 Hey, the drugs ain't doing it for you any more, asshole? No? Really? Hahahahahahaha!

Impotent sex tourist, drug addict and de facto voice of the psychoconservative right Rush Limbaugh is calling for all out war on Democrats on his nationally syndicated hatecast, equating them with rapists and murderers, indicating the twisted freak is inching ever closer to a full-bore nervous breakdown and, we hope and pray, a very public and very bloody suicide.

Yes, asshole, America is totally fucking doomed now that you facists have given it away to the communists. There is just no use living here anymore. You’re right. Best you find a bridge that can endure your colossal weight and jump before, heaven forbid, a Democratic Congress votes funds to repair it, you immense fat fuck!

Check this out: The Crooks and Liars people, commies with stomachs of steel, listened to Plushbaugh’s latest hatecast. A caller dialed in to discuss the erection of concentration camps for kindergarteners who refuse to participate in bayonet drills – a favorite topic of his program and listeners – and the hatecaster just lost it.

Sounds desperate doesn’t he? Really howling in despair. Time to help put him out of his pain, Stinquers. Call him up every day and give him the location of bridges that the Army Corps of Engineers has certified as capable of handling his monstrous weight and offer him a ride to one of them to jump. After all, if America is not worth living in any more, the guy’s got not place to go, except maybe a museum of natural history.

Wow it sounds like his meds are working just fine. WTF is a “Now Gang”? N.O.W.? Yeah they’d be totally cool with a woman getting beheaded.

NEW YORK (Reuters) – The global economy may be deteriorating even faster than it did during the Great Depression, Paul Volcker, a top adviser to President Barack Obama, said on Friday.

“I don’t remember any time, maybe even in the Great Depression, when things went down quite so fast, quite so uniformly around the world,” Volcker said.

@Prommie: Oh, yes, this will go down as the 7-generation catastrophe, if there are any survivors.

A happy song of Hope:

Even the fantasy bubble that is Sport isn’t immune.

@ManchuCandidate: See, if Nady had remained a Pirate he would have a lousy salary but he’d be liquid!

Someone should lean over Johnny D and whisper “It could be worse, it could be murder” and see what he says, the dumba$$.

@drinkyclown: I believe NOW released a statement saying that it was more than just “domestic violence”, it was a culturally-sanctioned honor killing, in an attempt to draw attention to similar atrocities that happen every day in the land of our beloved ally, Saudi Arabia, among others.
He’s really losing it. Can we get the total feces-throwing breakdown on pay-per-view?

@Mistress Cynica: I am thinking if we can provoke it, maybe we can collect royalties. Quick name some bridges we recommend he consider leaping from!

Love it or leave it, Rush. Or am I on the wrong page?

@nabisco: The towers are Lambda shaped

And so the Homosexual Agenda subverts bridge construction.

Ya gotta love how wrong-wingers will hose the US as the most vile, socialist-islamist commie hell-hole on the planet in one sentence, then proclaim that it’s the greatest nation on Earth in the next.

Is the rest of the world really that bad?

There are good reasons, however, to believe that the confusion and uncertainty that the Bush/Obama team of economic experts has created in the financial markets is largely due to these experts’ misplaced priorities and allegiance, not their “sincere but unsuccessful” efforts. It is a problem of having some huge elephants in our nation’s financial policy-making room. Mike Whitney aptly calls Treasury Secretary Tim Geithner “a Trojan Horse for the banking oligarchs”:

“The banking lobby has already set the agenda. All the hoopla about ‘financial rescue’ is just a smokescreen to hide the fact that the same scofflaws who ripped off investors for zillions of dollars are back for their next big sting; a quick vacuuming of the public till to save themselves from bankruptcy. It’s a joke. Obama floated into office on a wave of Wall Street campaign contributions and now it’s payback time. Prepare to get fleeced. Geithner is fine-tuning a ‘public-private’ partnership for his buddies so they can keep their fiefdom intact while shifting trillions of dollars of toxic assets onto the people’s balance sheet. They’ve affixed themselves to Treasury like scabs on a leper. Geithner is ‘their guy,’ a Trojan horse for the banking oligarchs. He’s already admitted that his main goal is to, ‘keep the banks in private hands.’ That says it all, doesn’t it?”

Timothy Geithner, Henry Paulson, Ben Bernanke, Larry Summers, and their cohorts at the helm of the Bush/Obama financial decision making machine are very smart individuals. They are among top Wall Street masterminds. The problem is that, at the core, they are committed, first and foremost, to protecting the interests of Wall Street financial giants. Indeed, it is safe to say that they are disguised lobbyists of those financial firms. No matter how hard they try to camouflage their bailout schemes, or how many different names they use for those schemes, their starting point is always protection of the insolvent banks.

@nojo: That one is down in the Dominican Republic, so Rush can get some sex tourism in before the final leap.

@Mistress Cynica: I’ll just have to add be-heading to the Indian (as in India) “Stove Accidents” and dowries, Female circumcision, and “A man is the head of the household, so there’s no such thing as rape in marriage” list of things I cannot condone under “Cultural Diversity”

I live for the day that Rush fucks up his medication and melts down on the air. It will be a beautiful thing to see.

@blogenfreude: I live for the day a child’s testimony sends him to prison where he will be raped to death by his adoring neonazi fans and then stomped into tomato paste, spread on toast and eaten in a satanic communion with his disciples.

That, or somebody mistakes him for a brood sow and puts him in a pen for breeding. Then, after the breeding? Sausages!

@ManchuCandidate: Satanic monsters, neonazies, goblins would love a chance to chew his flesh, no doubt.

@FlyingChainSaw:
Upon entering prison Rush would check himself into protective custody and start filing incoherent legal briefs while proclaiming himself to be a political prisoner.

@FlyingChainSaw: I am sorry they killed that chimp in Connecticut, I did not know that when a chimp is mad at you, what it does is start eating you, beginning with the face. Limbaugh deserves that, an enraged chimp, eating his face and hands while he is still alive.

@Promnight: I am haunted by the story of that poor lady. Oh, gosh, I will never use the expression ‘rip his face off’ again. It’s unbelievable. Poe or Stephen King couldn’t imagine something like that. Her eyes? Oh, no. I dunno if I could wish that on Fuckbaugh.

@FlyingChainSaw: From what I have read her eyes will survive, in fact, she has more of her face left than initial reports suggested.

I also am deeply, deeply horrified by what happened to that woman, filled with despair and darkness over it, and cannot imagine anything worse.

That is why I can imagine it happening to Limbaugh, would, in fact, pay to see it.

@Promnight: I couldn’t read past the first story. Eyes and face and jaw gone. I just couldn’t imagine it. I could but I didn’t want to. I couldn’t wish it on Fuckbaugh. Can of gasoline. Zippo. Four or five minutes of cheering. Bye. Anything else is torture. What this lady has in front of her is a decade of pretty much non-stop torture. It’s monstrous.

@FlyingChainSaw: Uh oh. Punning without a license is illegal?