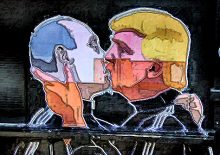 The Daily Beast reports today: “The documents show Trump and his wife Melania paying $5.3 million in regular federal income tax—a rate of less than 4% However, the Trumps paid an additional $31 million in the “alternative minimum tax,” or AMT. Trump has previously called for the elimination of this tax.”

That’s right, ASSHOLES! without tax lawyers, Precedent FUCKFACE! von CLOWNSTICK! pays a 15-20 per cent lower tax rate than you do because he really cares about you and all the toothless meth freaks that wear his Chinese slave-shop hats and voted for his sick and twisted administration to dream up new and horrific schemes to rape them and AMERICA! bloody.

The Kremlin chew toy whined in a press release subsequent to the Daily Beast report:

“It is totally illegal to steal and publish tax returns,” the White House statement read. “The dishonest media can continue to make this part of their agenda, while the President will focus on his, which includes tax reform that will benefit all Americans.”

Paging Nojo: Umm, I love Flying Chainsaw and his posts more than my favorite pair of shoes, but why is everything on our website now inexplicably in BOLD?

I don’t dare dive under the WordPress hood, I leave it to you, Daddio.

@SanFranLefty: Change it to italics.

@SanFranLefty: FUCK IF I KNOW PROBABLY A TAG THAT DIDN’T GET CLOSED I’LL LOOK INTO IT

So according to Trump, hiding this information is helping???

Ironic from the guy who demanded that a sitting president reveal his birf certificate and who did.

Twitler could go on national television and announce that he’s a Russian agent working to destroy the US government for his own personal profit, and his hate-crazed, sadistic followers wouldn’t care. They already voted for this lying, racist, sexist, xenophobic, bullying, vile, rapist scumbag because he’s just like them.

@nojo: I’m probably also a cuck, whatever the hell that means.

@¡Andrew!: It neans an obese virgin questions your virility.

Hey – were those bozogate billboards photoshop or real?

@JNOV: Bozogate billboards were Photoshopped “Miss me yet” billboards. I don’t recall where the originals turned up in the wild.

ADD: Oh, right, there were two. The other one was a riff on the WorldNetDaily “Where’s the gift certificate” billboard.

ADDADD: And, I still have the original layered files, if I’m ever in a mood to recycle.

@nojo: Cool cool. I asked some folks if we should rent a billboard demanding a town hall with Reichert. They said yeah – start a Go Fund Me campaign, so, there’s that.

@nojo: Have no idea where we’d put it – somewhere with maximum exposure even outside our district.

1. My files are web-resolution, if you’re wondering. They wouldn’t blow up to a billboard.

2. Old billboard rule of thumb: Seven words or less. That’s all the time drivers have to read it.

3. Old designer rule of thumb: Work with your printer. Billboard companies want their files just so, and it’s probably an Illustrator version from ten years ago. In CMYK, of course.

@nojo: Cool. ACK with the CMYK – one of my summer jobs was at a print shop.

@JNOV: I’m soooooo glad I got out of print. (Okay, it died on me.) If I hear one more complaint that the postcard doesn’t look like the computer monitor…

@JNOV: Mark your calendar: The next major action is the April 15 Black Lives Matter/Tax Day protest set to rock Seattle, and you’re welcome to join us :-)

@¡Andrew!: Tax March peeps changed the time of the march so they won’t dilute the BLM message, but they encourage people to go to both. I plan to, but I don’t know where the tax march ends. The BLM march starts at Westlake.

Related, I wonder if we’ll get an estimate of how many postcards were sent on The Ides of Trump. I have about 100 left. I might keep sending them until April 18th.