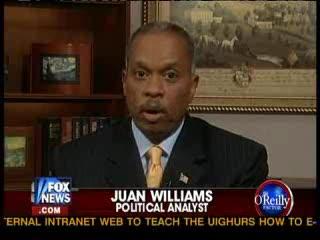 The New York Times reports that National Public Radio yesterday terminated its employment contract with contributor Juan Williams over comments he made on Bill O’Reilly’s talk show expressing fear and mistrust of Muslims who dressed in traditional clothing:

The move came after Mr. Williams, who is also a Fox News political analyst, appeared on the “The O’Reilly Factor” on Monday. On the show, the host, Bill O’Reilly, asked him to respond to the notion that the United States was facing a “Muslim dilemma.” Mr. O’Reilly said, “The cold truth is that in the world today jihad, aided and abetted by some Muslim nations, is the biggest threat on the planet.”

He continued: “I mean, look, Bill, I’m not a bigot. You know the kind of books I’ve written about the civil rights movement in this country. But when I get on the plane, I got to tell you, if I see people who are in Muslim garb and I think, you know, they are identifying themselves first and foremost as Muslims, I get worried. I get nervous.”

Juan Williams and other non-partisan journalists’ participation in Fox News roundtables have concerned media watchdogs for some time. The conservative opinion channel has long waged a dishonest propaganda campaign aimed at discrediting mainstream media organizations by labelling them as politically biased. One of the techniques the channel most frequently employs to propagate the idea consists of putting together discussion roundtables comprised of Right-wing partisan opinion journalists such as Charles Krauthammer and William Kristol one one side and mainstream media journalists on the other –with a partisan Fox News host (such as Brit Hume) acting as supposed impartial arbiter. Though there have been others over the years, Juan Williams was perhaps the most frequent and notable of the “useful idiots” who compromized their employers’ credibility and impartiality in exchange for lucrative face time on Fox News.

The move is long overdue.

Exactly, what took them soooo long?

Is this all still going on? We need some new crazy people. I’m sick of the ones we’ve got.

In more important news… Lion OS, people!!!!!! How awesome is that? Lion!!! That’s like the biggest pussy evah!!!11 Steve Jobs has really done it this time. The first fully-functioning scratch-n-sniff OS. Naturally it will make all my machines obsolete so I will have to buy new ones but that’s why we love Apple. They never let us rest.

I feel so powerful. I wrote NPR another note about their continued employment of Williams just the other day.

In other stupid news, this came as a total surprise to me. I thought Canadians were more sensible than US Murkans.

@Benedick: So Apple is wandering into “Lions and Tigers and Bears, Oh My!” territory? How long before Steve Jobs announces that he is indeed the Wonderful Wizard of Oz?

@karen marie wants to know — Fucking integrity, how does it work?:
That’s our RW GOPer lite Prime Minister Fatty, er, Stephen Harper’s doing. The gag order is usually about global warming… which upsets our globular PM as he is a fan of anyone from the oil patch.

@Benedick:
Re: Lion – impressive, but the new Air is more so. If the thing gets any thinner, it might blow away in a strong breeze.

Re: Juan “I didn’t read the AQ training manual about not dressing in traditional garb” Williams – comment sections everywhere are now filled with unreconstructed Reagan-era conservatrolls whining about “why are we paying for NPR”. Apparently they’ve forgotten how they hounded NPR back in the 80s and 90s.

@al2o3cr: That’s right. Torture me. My OLD Air is like so totally OLD (6 months) I’m ashamed to turn it on. I put it in the closet where it belongs. I keep telling people it’s not girly it’s SLEEK. Shit. Now there’s a new one that isn’t OLD. I want it so bad it’s like there’s a hole in my heart where love should be. I must go now and do what my people have done since time out of mind when life became overwhelming: make a nice cup of tea.

@Dave H: Steve leapfrogged the Wizard and is going straight for God.

Lion. OMFG. Who thinks up these names? It’s pure genius.

@Dave H: So far, we;ve had Jaguar, Leopard, Tiger, and Snow Leopard, I think. Now Lion. Steve’s gonna run out of big cats. It’s hard to go from Lion to Caracal. Though their ears are really cool.

No, but that’s the public AQ manual. The top secret private AQ manual tells terr’sts to dress in traditional Islamic garb because the public believes (from reading the fake, public, manual) that they should look out for A-rabs dressed in Western clothing.

It’s all very confusing, which is why JW is scared of even the word “Islam.”

@Mistress Cynica:
As long as he doesn’t call it Civet (SARS.)

@Mistress Cynica: I think next he’s moving on to the names of tyrants past starting with Assurbanipal.

@Benedick: OS Sabertooth will be the transition into prehistoric creatures. By the time we get to Mastodon, we’ll have wi-fi capable cerebellums and Dodger will long have had his windshield with streaming Brazilian beach volleyball nature shows.

ADD: Maybe this guy can go back to his original name of John Williams, whether that is his real name or not. The alliteration always made me gag.

Fuck NPR. I quit listening and donating when they rolled over for the Iraq war.

I like the timbre of his speaking voice but the dude really screwed the pooch on this one. Y’know, I have a relative who used to get hassled by black kids in high school and now she gets nervous when she sees a black person walking towards her on the street. Is that OK, Juan?

@redmanlaw: Me, too. Their “reporting” on the lead-up to the Iraq invasion sounded more like they were reading the Powerpoint slides from one of Dumbya’s DC hacks.

Our local station is very good and did as much as it could to combat the Iraq ‘WMD’ madness. I’ve never heard this person on NPR.

@redmanlaw: @¡Andrew!: I haven’t donated since the beginning of the Bush maladministration. The only reason I listen to it at all now is the CD player in my car done broke and it’s the only station w/o commercials I can get on the radio for the entirety of my trip an hour each way twice a month to visit a client north of here.

I’ve been taking Lucy to a dog social group on Sundays in Dartmouth, MA and listen to the Cape & Islands NPR station on that round trip. Surprisingly, it’s way more lefty than WBUR which is what I listen to on the trips north. I find myself shrieking and gritting my teeth far less.

Countdown to martini time – after I buy my hunting license for this weekend and load some cartridges for my two rifles. Still gotta find my extra Buck knife, throw my clothes in a bag, do a final sight in tomorrow AM and take off for my friend’s ranch as soon as I’m done in court tomorrow afternoon.

@redmanlaw: Enjoy yourself out there.